Mark Zuckerberg wants to be your pastor (or at the very least your community leader). And Facebook could soon be your church/ new community. This is no joke.

Recently, the founder and CEO of Facebook told Refinery29:

For the last 10 years, our mission has been to give people the power to share and make the world more open and connected. So we’ve been really focused on giving people a voice individually and helping them stay connected with friends and family. We all just have this feeling now that we have a responsibility to do more than that.

A few days ago, Zuckerberg revealed that his responsibility “to do more than that,” is to create meaningful communities for all of humanity.

Being well connected to the world of social media, Zuckerberg has noticed that communities are declining. The Barna research group has documented that church attendance in America as dropped from forty-eight percent in 1966 to thirty-five percent in 2016. Major youth sports including basketball, baseball, softball, and soccer have declined in participation by an average of almost 10% between 2009 and 2014. Reflecting stats like these, Zuckerberg said, “For decades, membership in all kinds of groups has declined as much as one-quarter.”

Seeing that churches and civic groups are on the decline, Zuckerberg has decided to shift Facebook from an individual platform to a community platform.

To grasp Zuckerberg’s zeal for community, one needs to step back and review his 2017 Harvard Commencement Address. There, Zuckerberg outlined his hope for the world. One could say, he shared his Facebook gospel.

His speech began by noting that the human condition was one of relational connection. “All people want to connect,” he proclaimed. From these connections, people find meaning, purpose, and joy.

During the speech, he called on people to embrace three actions that promise promote, facilitate and encourage human connection. First, he asked men and women to take on “big meaningful projects…to create a world where everyone has a sense of purpose.” Second, he encouraged governments, societies, and cultures to “give everyone the freedom to pursue their purpose.” And third, he championsed the idea that, “we can create a sense of purpose for everyone by building community.”

Grasping his worldview, we can understand why the news that communities are dying is troubles Zuckerberg. He needs those evaporating communities to create an atmosphere where people can dream big and have the freedom to explore those dreams..  He said,

Without community, people feel, “disconnected and depressed.” They stop creating, connecting, and helping their fellow men and women.

Yet more and more people do not feel like they have community or are a part of something bigger. More and more people are leaving their churches. Consequently,  almost half (47%) of all millennials are still seeking a few good friendships. Churches and like groups appear to be dropping the community ball and are disappearing when people need them the most.

Zuckerberg wants to pick up the ball and run with it. His “lofty ambition” as CNBC deemed it is to place people back into meaningful communities so that they can in turn “bring the world closer together.”

He goal is noble. But fault. Yet, the unraveling of groups – and by extension, our society – has little to do with the group structure and everything to do with people’s theology.

The church roof is not collapsing. According to a recent study by Thom Rainer and company, eighty percent of churches are not in decline or plateaued. The number is actually closer to sixty-five percent. Thirty-five percent of churches are growing. Barna’s research supports these facts noting that the dip in the percentage of Christians who attend church at least one a month and say their faith is important sits around six percent. Culture Christianity is evaporating. But the church is still marching forward.

Most churches that continue to value the historic, conservative teachings of the Scripture are actually growing. Ninety percent of growing churches approach preaching from a systematic or expository viewpoint. Only one-third of dying churches preach systematic or expository sermons. Moreover,  Dr. Steve Parr and Dr. Tom Crites found that children who had a high view of Scripture were eighty-four percent more likely to remain in church as an adult. Reflecting on these numbers, David Kinnaman and Gabe Lyons concluded,

“This is an enormous disparity, and we believe, indicates that immersion in Scriptures is a driver of church growth and spiritual vitality.”

In other words, churches that value the Bible have meaningful community.  Churches that leave the historic teaching of the Bible are shrinking.

Admittedly, many churches are not healthy theologically. Forty percent of pastors will not preach on certain topics because they fear reprisals from the people sitting in their church’s pew. Four in ten pastors refuse to create communities built on the security and peace of God’s Word. Consequently, many church communities are shrinking because pastors fear people more than they love God.

And pastors are not alone. Much of America has theological and philosophical convictions that lead them away from meaningful communities. 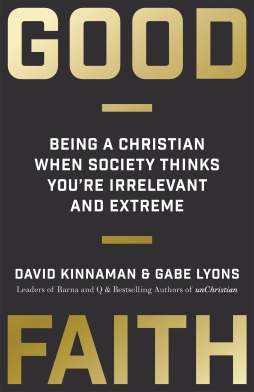 According to the recently published book, Good Faith, Eighty-four percent of US adults believe that their “highest goal for life is to enjoy it as much as possible.” Nine-one percent of adults believe that “the best way to find yourself is to look inside yourself.” And ninety-seven percent of adults believe that, “you have to be true to yourself.” Americans are striving after individual happiness by looking within themselves, desiring to do what they want regardless of society or social norms. The religion of self quite natural promotes the individual to a demi-god like status. And as Greek literature has shown us, demi-gods do not get along well because no other person or group can love us like we love us.

Because we do not get our felt needs perfectly meet by others or by our church, we are prone to lash out at other people and to withdraw from groups. Even  Zuckerberg who genuinely wants to believe that, “People are basically good…[and] genuinely want to help other people” has to wrestle with this religion of self failure.

He is reorienting Facebook in-part because many people misused Facebook to spread fake new stories or to bully their peers. To begin to create a workable and more meaningful community platform, he has had to roll out new tools that allow group administrators to delete hate speech and discriminatory comments. Zuckerberg wants to trust people, but he simply cannot because the religion of self ultimately destroys meaningful community.

Thus, the people of the world will need leaders like Zuckerberg who can “set the culture, inspire us, give us a safety net, and look out for us.”

Will people really want to exchange their local pastor for the great Facebook guru, pastor?

I suspect some will. Facebook group user numbers are sky-rocketing. The ability to have meaningful community on your terms with minimal oversight will and is resonating with the many Americans and others who want to find morality and meaning from within their hearts.

When we hop on Facebook, we can visit the young married group, the Lego group, the Cubs fan group, the needlepoint group, the grandparents group, and so…so many more. If we walk into our local church lobby, we get to choose one on or two classes. We want so much more because we truly are more than just a young parent, a single guy, or a grandparent. We find happiness and identity with many things as we delve into our psyche. Facebook may potentially have a group for everything and everyone we with which we choose to identify.

This leads us to our next questions: Is Facebook a threat to our local churches? Will Zuckerberg start replacing pastors with Facebook administrators?

I believe the answer is no. The historic Christian faith is not built upon self-discovery but upon self-abandonment. The church thrives and grows when people die to their desires and follow Christ. Yes, church members give more than the general society. They do not give simply because they feel connected to other people. They give because they have been loved by God.

Facebook is not rewriting the underpinnings of the church. The company is challenging them, battling them. Zuckerberg is essentially offering a new gospel built upon the promise of community. While religion may be the opiate of the people, he is sure that community is the people’s salvation.

Since Christ promises that the gates of hell will not prevail, we can be confident that Zuckerberg will replace the church with online communities.

Though Christians disagree with Zuckerberg’s solution to the dissolution of our societal groups, we should applaud and thank him for recognizing that our culture wants more meaningful relationships.

Thankful, we know where to find true meaning that no one person or group can steal from us. We can offer the Christ the risen savior to our hurting world.

And now it is time for all of us to answer a question. Are we ready to share Christ with our hurting and lonely neighbors or are we content to let Facebook be their church?