Had you told 13 year-old Peter Witkowski that he would be reading thousands of pages every year, his eyes would have rolled upward and his mouth would have broken into a sarcastic laugh.  Despite my youthful misgivings and limited prophetic abilities, I have come to love books. I count them as some of my truest friends. They have guided, encouraged, and challenged my heart and mind.

Given my academic studies and profession, my tastes unapologetically bend towards history and theology. Though I read a good deal of academic literature, I have found such literature to possess an engaging sense of readability. Below are the three books that most prominently snuck into my conversations with April Witkowski and a few others in 2019. Though all are not academic in nature, I found all of them to be enjoyable reads.

“With apologies to the Beatles, George Whitefield was the first “British sensation.” The missionary to Georgia quickly outgrew the confines of his Savannah assignment and metamorphosed into the first great American preacher. He profoundly shaped the America Christianity as he preached to overflowing churches, challenged other pastors to preach the doctrines of grace, denounced the faculties of Harvard and Yale for their lack of spiritual vigor, and employed the technology of the printing press with unprecedented skill. Since his death, historians have either stomped upon the preacher’s grave in frustration or have desecrated his memory by pulling out one or two choice biblical lessons that ignore the scope of his life and ministry. Kidd attempts to avoid both extremes. He explores and defends Whitefield’s robust faith, giving credence to the preacher’s spiritual believes and experiences. But Kidd also wrestles with Whitefield’s faults, chronicling his odd (and at times comical) interactions with women, his self-awarded sense of grandeur, and his promotion of slavery. Kidd provides readers with a sympathetic and honest presentation of the first “British sensation”

Whitefield may have adopted modern marketing and communication methods, then, but his message was traditional and Calvinist. Instead of softening his view on the depravity of man in response to humanitarian critics, he emphasized original sin more. Whitefield spoke regularly of how people in their lost state became “sunk into the nature of the beast and the devil.

America’s Pastor: Billy Graham and the Shaping of a Nation

Readers who engage Grant Wacker’s book will discover a wealth of insights into the depth of breath of Billy Graham’s influence over America. Wacker looks at how southern culture, the civil rights, the economy, and many other factors shaped Graham and were shaped by him. While Wacker paints an endearing picture of Graham’s heart for reaching the lost, the author also deals with the pragmatic realities of Graham’s life and ministry, discussing how Graham worked with Mormons, interacted with racists, and formed an almost monolithic support base middle-class, white evangelicals. Those seeking to understand the many and varied ways Billy Graham’s life has shaped their culture will find Wacker’s book to be a fascinating and beneficial read.

To say that Graham possessed an uncanny ability to adopt trends in the wider culture and then use them for his evangelistic and moral-reform ability purposes is another way of saying he possessed an uncanny ability to speak both for and to the times. Speaking for required him to communicate in a registrar his listeners could hear. He legitimated their social location by guaranteeing that their values would count…Yet…he spoke to them as well. He helped shape their consciousness…Speaking to Americans mean that he challenged them to live up to their self-professed values of biblical equality, moral integrity, and social compassion.

Prior to World War 2, to be British was to be one who championed “decency and fair play.” But as the Nazi military machine filled Europe with death, Winston Churchill decided to liberate the British army from her people’s high sense of morality. The Prime Minister empowered Cecil Clarke, Colin Gubbins and others to research and deploy the dirtiest tools of warfare. The stories that follow appear more fanciful than the tale of Beau Geste. Yet these stories arise not from Milton’s imagination but from the British National Archives. Readers cannot help but be drawn into the tales of misfiring rockets that became for the first anti-tank weapons, daring assignation attempts that snuffed out hated Nazi leaders, and commandos raids that resulted in ships disappearing into the night. As author P.C. Wren noted in 1926, “Truth is stranger than fiction.” Milton has rediscovered this maxim afresh, providing his readers with a fantastic read. In addition to chronicling the spies’ bravado, Milton found ways to discuss the humanity of his subjects, weaving details into his book about how their sixteen hour days and long alcohol filled nights strained marriages, enhanced their grief, and resulted in a tank being driven to church. Milton has put together a compelling string of stories that reveal both the strategic benefits and the human cost of Churchhill’s ungentlemanly warfare.

A Ministry of Ungentlemanly warfare. If its name was amusing, its role was anything but. It was to subvert the conventions of war – punch below the belt…Any German target, however soft, was to be considered fair game, and no weapon was to be considered off limits. “This from of activity was of the very highest importance.’ Said Churchill. 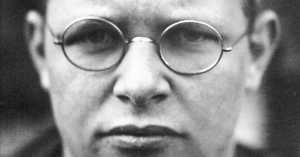 On Saturday, October 31st, most people will be celebrating Halloween. As Protestants and Baptist, we have some far greater to celebrate, Reformation Day. On October 31, 1517 the German monk, Martin Luther nailed the 95 thesis to the door of the Wittenberg church. With his little document, Luther began the protestant reformation, a movement that refocused God’s church on the gospel and the authority of the Bible. First Baptist Church Eastman exists today because men like Luther were willing to sacrifice everything for the advancement of the truth.

This year FBCE will be Celebrating Reformation Day by looking at the life of Dietrich Bonhoeffer. As Luther before him, Bonhoeffer championed the doctrines of grace. He refused to abandon the gospel even when faced with imprisonment and death at the hands of Adolf Hitler. Make plans to be a part of this year reformation festival on Wednesday October 28 from 6:30-8:00 pm. The event will be similar to an open house or fall festival. It will feature games, crafts and play depicting Bonhoeffer’s last sermon.Come in your best WW II gear and get ready to learn about the Pastor who fought the Nazis.

Kids are asked to attend with their parents.