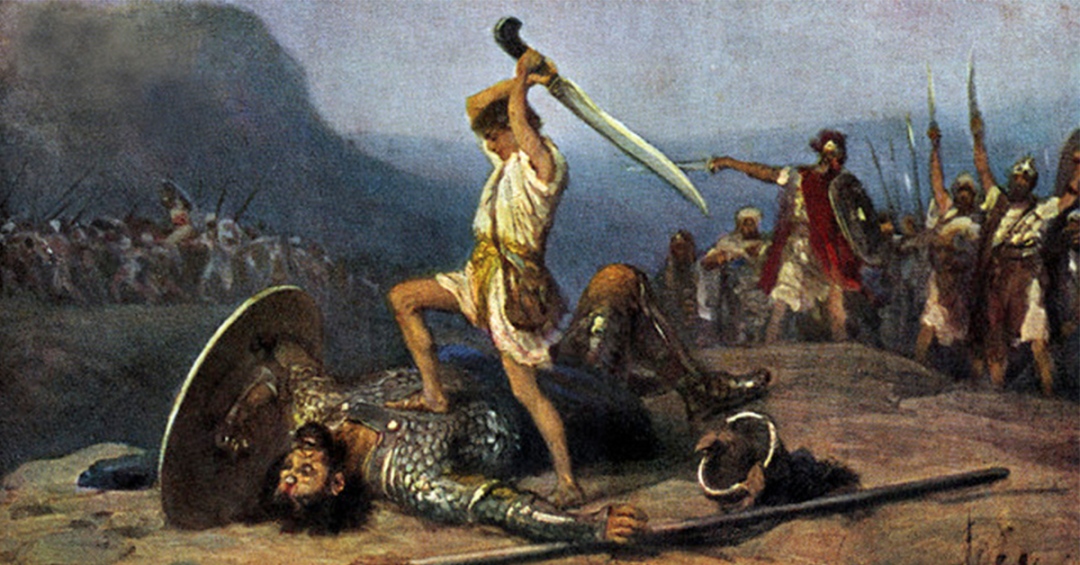 Why You Got David and Goliath Wrong

We love the story of David and Goliath. But, we often misunderstand the story. We see the narrative as a great example of how we can save ourselves from the giants of adversity through good analysis, elbow-grease, and ingenuity. The famous columnist Malcolm Gladwell encapsulated the typical approach to the David and Goliath story when he said it reveals that the underdog status empowers people to realize that “Giants are not what we think they are…The same qualities that appear to give giants strength are often the sources of great weakness.” For example, Goliath’s size which appeared unconquerable ended up being his undoing because he could not dodge a little stone. In other words, we all want to be David and craft our own story of “greatness and beauty” overcoming our Goliaths of depression, bad bosses, anxiety, disease, and divorce.

But the author of 1 Samuel never intended for us to identify with David. He wanted us to see ourselves as the nation of Israel. Goliath did not challenge David. He challenged the armies of Israel. The text of 1 Samuel 17:10-11 reports that Goliath said, “I defy the ranks of Israel this day.” And in verse 25, the army of Israel understood that Goliath has challenged them. They reported that Goliath, “has come up to defy Israel.” Goliath was picking on the army, an army that did not include David. He was simply visiting his brothers for the weekend.  If we have a Goliath in our life defying our God, we are not David, we are the nation of Israel. Goliath is not David’s giant; he is our giant.

When David began to take an interest in fighting Goliath, he understood that Goliath was not his problem. In verses 26 and 36, he clearly stated that the uncircumcised Philistine was defying the “armies of the living God.” David did not have a personal beef with Goliath. The Philistine warrior was not mocking David or his daddy. This fight was not indicative of David overcoming, his pride, depression, or unemployment. As Andrew Willet noted,

“It was the honor of God and the reproach of the people of God that moved David to act.”

The point of David and Goliath was not that we turn the impossible odds of our puny lives into spectacular triumphs. The point of David and Goliath is that the savior will save all who trust him. We are not called to fight the giant. We should not run and get some stones of personal improvement. We are called to trust our great shield and defender who has already conquered death for us.

The next time we face a giant who wears the armor of insecurity, poverty, depression, broken relationships, or hate, we should to lean into Christ. We should to remember that God has already cut off the head of the snake by living the perfect life we were supposed to live, dying on the cross, and rising from the dead on the third day (Col 2:9-14). As Paul noted,

“He disarmed the rulers and authorities and put them to open shame, triumphing over them in him (Col. 2:15).”

We cry out to the savior because he promised that the same power that raised Christ will give us victory in this life (Col 2:12). We stop working to overcome our giants because we know, “that if we ask anything according to his will he hears us. And if we know that he hears us in whatever we ask, we know that we have the requests that we have asked of him (1 John 5:14b-15).”

God saves those who cannot save themselves. This was the point of David and Goliath. This is the beauty of the gospel. This is the hope of those who face giants.

3 thoughts on “Why You Got David and Goliath Wrong”