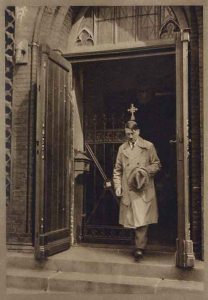 Seemingly ever since President George W. Bush took office back in 2001, the word Nazi became disturbingly cool. Most every political and social group bantered around the term with ferocity. They had good reason. If you can convince people that your opponent’s position is nothing more than a dirty, old member of the Nazi platform, you can quickly take the moral high ground. From there, you can begin convincing people that your position is right. Who wants to side with Hitler?

Not too surprisingly, many supporters of homosexual marriage have begun to claim that conservative Christians are nothing more than modern day Nazis. Viewing the church to be a place of religious indoctrination and societal intolerance, many in the LGBT community think a direct link exists between Hitler and conservative pulpits. Hitler murder millions of people in the name of Christ. The church today alienates and maligns thousands of innocent people by holding to the values of 1950 Christendom. The homosexual community want Christians to abandon the irrational hate of the 20th Century and embrace the love of God.

So are those trying to redefine marriage correct? Are conservative, Bible believing Christians nothing more than modern day Nazis? Let’s take a look.

Nazi View of the Bible

In one sense, Hitler did make use of the church. Unlike the American church, the German protestant church was funded by German tax dollars. Being a pragmatic man, Hitler used all government
agencies including the German church to advance Nazism. But before Christianity could become a truly useful member of the Naziparty, Hitler had to divorce it from the Bible. He had to remake the religion into an agency the promoted the German Volk instead of Jesus.

Viewing the Bible to be overtly Jewish and an excessively feminine work, Hitler encouraged the church to abandon the traditional, literal view of the Bible. His Nazi theologians claimed that:

The Devil values the printed page and stretches it out to demand signatures, while God reaches out his hand. Whereas the Jews were the first to write out their faith, Jesus never did so.

The Nazi knew that the written words of the scripture

hurt their cause and had to be jettisoned. In place of the Bible, the Nazis worshiped the intentions of Jesus and the state. “Down with Paul and the Old Testament,” they chanted. (Evidently, Jesus was Jew hating Aryan.) Driven by nationalistic furor, the Nazis began chopping apart the Bible. They removed all references to sin, the supernatural, and Judaism. (Yes, the Nazi Bible was a pretty small book.) Such things were deemed to be Jewish perversions and unloving doctrines weakness. Hitler and his followers wanted
a nationalistic Christianity free from the dogma and the doctrine of the biblical text.

At the end of the day, Hitler vehemently opposed biblical, conservative Christianity. (He also had little patience for the Nazi church, deeming it unwieldy and petty.)  As early as 1933, the Nazi party began prohibiting soldiers and statesmen from being involved in church life. By 1939, the superintendent of military chaplains boasted that, “no one understood” confessional Christianity “anymore.” Historic Christianity opposed Hitler’s murderous policies of Nazi superiority. And despite his early propaganda speeches, the dictator knew it.  He wanted to rid Germany of the faith. Historian Doris L. Bergen noted that, “hard-core Nazi leaders…as well as Adolf Hitler himself, considered Nazism and Christianity irreconcilable antagonists.” Nazis were not yesterday’s fundamentalist.

All Scripture is breathed out by God and profitable for teaching, for reproof, for correction, and for training in righteousness.

Today’s fundamentalist believe that the Bible directly conveys God’s message to humanity.  They are driven by the conviction that Scripture is God’s word and must be obeyed.

Conservative Christians condemn homosexuality not because they hate “brown” people and minorities as the Nazi did. They condemn homosexuality and all sex outside of biblical marriage because such actions as pastor Sam Allberry writes, “Contradict sound doctrine and the gospel.”  Unlike the Nazis, conservative Christians stand with the printed page of God’s word. Though unpopular, they cling to the Jesus of the Bible.  As the Apostle Peter says in John 6:38, “Lord, to whom shall we go? You have the words of eternal life.”

Biblically, the term “homosexual Christian” is an oxymoron. One cannot affirm Christ and value things that Jesus hates. To arrive at the point where homosexuality is an acceptable Christian behavior, one has to reject biblical authority. And this is precisely the tact of homosexual theologians. Timothy Johnson wrote:

I think it important to state clearly that we do, in fact, reject the straightforward commands of Scripture, and appeal instead to another authority when we declare that same-sex unions can be holy and good. And what exactly is that authority? We appeal explicitly to the weight of our own experience and the experience thousands of others have witnessed to, which tells us that to claim our own sexual orientation is in fact to accept the way in which God has created us. By doing so, we explicitly reject as well the premises of the scriptural statements condemning homosexuality

Just like the Nazi church and countless theological liberals before them, homosexuals have abandon the printed page. They look to the human experience for meaning and truth. And, they have no other choice. Commenting on the above quote, David Platt wrote:

If someone wants to advocate for homosexual activity, he or she must maintain that the Bible is irrelevant to modern humanity, inconsistent with our experience, and thus insufficient as a source of truth and guidance for our lives.

Homosexual theologians want a positive, sexualized Christianity free from the dogma and doctrine of the biblical text.

The answer is “No.” Conservative Christianity has always affirmed scripture and has been at odds with Hitler. Take a closer look at the likes of

Dietrich Bonhoeffer and the other members of the Confessing Church and the contrast will become even clearer.

However, I do not believe that homosexual theologians are Nazis. They are not advocating for the death of millions of Jews. The homosexual agenda is not the Nazi agenda. In short, we can safely conclude that neither conservative Christians nor homosexuals represent the rebirth of Nazism.

But homosexual theologians do share an intellectual pragmatism with the Nazi party. Both groups attempted to escape the authority of the written text of scripture. As Dr. Albert Mohler wrote a few months ago:

Once biblical inerrancy is abandoned, there is no brake on theological and moral revisionism. The Bible’s authority becomes relative, and there is no anchor to hold the church to the words of Scripture and 2,000 years of Christian witness.

The results of the Nazi and the homosexual theological experiments have been very different. One encouraged a culture to embrace Aryanism and the Holocaust. The other is leading the west to redefine sex. But, they share a methodology. They both believe the Christian faith can and should be unanchored from the Bible and made into something new.

One thought on “Mom, are Christians Nazis?”