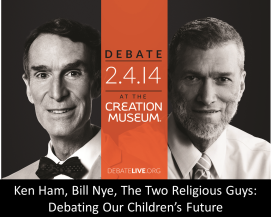 There were no fireworks, pounding fists, or even heated exchanges with wagging fingers between Bill Nye and Ken Ham this past Tuesday. Really outside of a few pictures and a handful of cartoon illustrations, the debate did little to directly engage children. But the seriousness of the debate should not obscure reality. The debate was all about the next generation. Bill Nye and Ken Ham were not just advocating science verses religion.  They were trying to determine which religion our children will follow.

Now I realize that most people happily recognize “Ken Ham’s creationism” to be religious. Ken Ham openly confessed his religious affiliation, appealing directly to the Bible on several different occasions. He told Bill Nye, “there actually is a book out there that tells us where matter came from. And, the very first sentence in that book says, ‘In the beginning God created the heavens and the earth.’” However, the debate also revealed that Bill Nye’s tenants of evolution are equally religious in nature. As Dr. Mohler wrote, “ It was… the central worldview clash of our times and of any time” (Mohler 2014). Let’s take a look.

Numerous times throughout the debate Bill Nye said he would consider creationism if there was proof for it. By his own admission, his evolutionary theories have at times failed to explain the universe. He noted that scientists thought the speed of the universe’s expansion was slowing. However in 2004, scientists discovered the opposite to be true. Yet, Bill Nye’s confidence in the Big Bang Theory remained unshaken. If anything, the discovery excited him.

His response is not surprising. According to Thomas Kuhn who coined the term paradigm, “neither proof nor error is at issue. The transfer of allegiance from paradigm to paradigm is a conversion experience that cannot be forced” (Kuhn 1996). In other words, Nye’s scientific foundations go beyond observable science. Even when confronted with unforeseen discoveries, the “Science Guy” will (as he did during the debate) rework his theories to fit new evidence into the evolutionary, naturalistic paradigm. Thus when Ken Ham did offer Bill Nye evidence, he remained unmoved. Bill Nye’s paradigm claims that all scientific discoveries point to evolution. Consequently, creationism may be many things, but it cannot be science according to Bill Nye.  To accept one scientific discovery as supporting creationism, Bill Nye would have to surrender his entire paradigm, one built upon the absence divine direction.  Despite Nye’s statement that “scientists embrace” those who challenge paradigms, reality has found the opposite to be true.

Bill Nye’s embrace of evolution also has a direct spiritual element. His very soul is sustained by a deep-rooted love for discovery. Learning how evolution explains the world is why Bill Nye gets up and goes to work every day. To abandon the evolutionary paradigm, Bill Nye would have to deny his very hope for significance. To do so would require as Kuhn noted, “a conversion experience.” Not surprisingly Bill Nye arrived and left an evolutionist. None could really hope that he (or Ken Ham for that matter) would have such a conversion moment in front of 3 million people. It would make for great television, but the world rarely does works this way. Sorry MTV. Rather towards the end of the debate, Bill Nye began attacking the story of Noah and other theological issues, revealing his reservations about creationism to be as much theological as experimental.

Moreover, Bill Nye’s affiliation with the evolutionary paradigm has rest upon a strong personal faith. Ken Ham tried to point out Nye’s faith several times during the debate. But, Bill Nye would not answer the question of reason and logic.

Let’s look at. If Bill Nye is correct and the world did evolve without divine directive and/or purpose, he can have no confidence in his mental power. Yes, he is a “reasonable man” with a good deal of intelligence. But according to Nye, humanity and humanity’s mental faculties appeared by accident. And reason created by illogical, natural forces could very well be faulty if not completely erroneous. Bill Nye’s (and all of humanity) could have less than a reasonable mind and not know it. Recognizing this problem Charles Darwin lamented, “The horrid doubt always arises whether the convictions of man’s mind, which has developed from the mind of lower animals, are of any value or trustworthy at all” (Darwin 2014).  To hold his evolutionary paradigm, Bill Nye must believe his mind to be trustworthy. But as C.S. Lewis noted, “if our own deepest convictions are merely the by-products of an irrational process, then…we have no reason to trust our conviction that Nature is uniform” (Sire 2004). Ultimately, Bill Nye can only affirm the evolutionary paradigm by believing blindly in the ability of human reason. As seen from the debate, his faith is unshakable. Not surprisingly, he won the “The Humanist of the Year” in 2010 (Humanist of the Year). Ultimately, Bill Nye is just a religious as Ken Ham.

The debate was about religion. Bill Nye advocated that our children be taught the religion of naturalism as seen in the evolutionary paradigm. Ken Ham advocated that our children be taught evangelical Christianity as developed from a literal interpretation of the Bible. Although I firmly teach that children should have the freedom to explore both religions, I believe Christianity offers a far better explanation of the world from what I have seen an experienced. Moreover if we believe scripture, Christians must affirm that Bill Nye’s “rational man” argument is flawed. According to Romans 1:18-23, human reason is corrupted by sin and is unable to discern truth. Paul wrote again in 1 Corinthians 3:19a, “the wisdom of this world is folly with God.” Let’s avoid folly.

Instead a determent to be washed away with the passing of time, I believe creationism will benefit future generations. As Kuhn noted, “The bulk of scientific knowledge is a product of Europe in the last four centuries. No other place and time has supported the very special communities from which scientific productivity comes” (Kuhn 1996). The last time I checked, creationism was the dominate school of thought in Europe during most of this time. What has changed? Evolution, as advocated by Charles Darwin and James Hutton. But instead of spurring children to scientific discovery as Bill Nye hopes, the evolutionary paradigm appears to be spawning a culture of narcissism.

Scientific discovery requires commitment and years of hard work without any guarantee that a person will make a significant contribution to humanity. However with Facebook, Twitter and a host of other social media outlets, a person can quickly attain stardom and immediate validation of their significance with a cool status. Now many will counter that science benefits humanity and offer a host of other reasons for valuing discovery. But ultimately, the evolutionary paradigm provides no basis for moral value. Nor can the paradigm promise that everyone will find the joy Bill Nye found. Nature is just randomly progressing along, allowing natural selection to dictate history. The joy of social media is just as compelling as the joy of science. And since it’s easier and a more certain attainment, the evolutionary paradigm appears to be producing narcissists instead of scientists.

On the other hand, creationism teaches that knowing God is far better than human self-worship. After all a creationist’s chief end is to glorify god and to love his/her neighbor. Shaped by Psalm 19 and a host of other passages, creationism encourages children to explore the majesty of God by studying the world he created. Creationism provides children with a great motivation for scientific discover. Let’s encourage science. Let’s teach our children creationism!