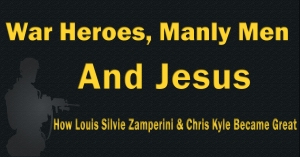 Like a lot of guys, I consider myself to be a slightly adventurous kind of Dad. Perhaps some things I enjoy are a tad adolescent. But I think there is a certain undeniable element of manly joy that can only be found while buzzing at my wife with toy helicopters, watching war movies, and holding my son in such a way that women everywhere scold me.

These past few weeks, I have been excited to delve into the stories of Louis Silvie Zamperini and Chris Kyle. With both men, you have tales of resilience, bravery, and victory against insurmountable odds. When I read about how Zamperini drifted in a rubber raft for over a month without supplies or of how Kyle dove back into combat with leg infused with shrapnel, I was hooked and wanted to know more about these men. Hoorah!

Bravery Is Not Everything

But as exciting as those stories are, we must remind our souls and our sons that acts of valor do not usher one into manhood. In both stories, the men were actually undone by their wartime feats. At the conclusion of WWII, Zamperini returned to America a drunk tormented by nightmares of his Japanese concentration camp commander, the “Bird.” And Chris Kyle’s battlefield experiences in Iraq left the sniper a bar fight enthusiast who struggled to connect with his wife and kids. As both men learned, bravely fighting “savage, despicable evil” does not necessarily make someone great man (p. 4).

For us and our kids to be godly, heroic men, we don’t have to paint our faces with animal blood, hit home runs, or have a wall collapse on us (though there is nothing wrong with any of these things).  Rather, we have to acknowledge that the greatest evil is not “out there, somewhere” but within us. We have to come to grips with the wickedness in our hearts and stop believing the lie that we are “basically good people.” As Jeremiah wrote, “The heart is deceitful above all things, and desperately sick; who can understand it” (17:9)? To be great men, we must humbly submit to the command of Christ.  And Christ

is what made these men great.

Louis Zamperini embraced Jesus in October of 1949. And once he repented of his pride, the former aviator found immediate relief from alcoholism and the nightmares. Because Zamperini had been forgiven much by God, he was in turn able to forgive his captors, creating an incredible story of hope and redemption!

And though Kyle also struggled with adjusting to civilian life, he too found his hope in the Christian faith. By trusting in Christ to deliver him from his sinfulness, the former SEAL was able to make sense of his life and save his marriage.

At the end of the day, the manliest of men are not the ones who buzz their wife with a toy helicopter (I know, this is a no brainer), run in the Olympics, or earn the most sniper kills in U.S. history. The most remarkable men are those who embrace Jesus and follow him with all their heart soul, mind, and strength (Mat. 22:37). 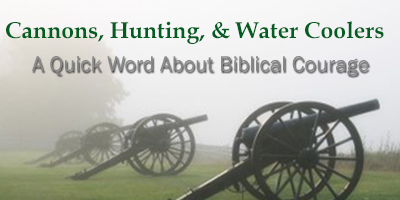 Though I was by no means a fan of memorizing poetry or of anything that smelled of school as a kid, I did find the “Charge of The Light Brigade” to be fascinating account of courage. I dreamt of what it must have been like to be a British soldier charging into Russian cannon fire undaunted by the threat of death.  Ah, bravery!

Today, American society has transformed the idea of courage from an act of selflessness into an act of selfishness. From the content found on ESPN or in any other major news outlet, society appears to be saying that the most courageous thing a person can do is to publicly be yourself. Hence, the rookie football player, Michael Sam is a champion of courage because he expressed his sexuality irrespective of societal norms.

But this definition of courage is inherently flawed. Secular society by necessity has to place limits on self-expression. For example, people who openly express their personhood through various forms pedophilia receive jail time. Society puts limits on self-expression in an attempt to curb murder, bribery, fraud, and a host of other crimes. Admittedly, the definitions what is courageous self-love what is criminal changes generation to generation. In the 60’s, expressing one’s self through Christianity was acceptable and homosexuality was out. Today Christianity is out and homosexuality is in. But the fact remains: If everyone woke up one day and decided to ”courageously” express themselves without reservation as Michael Sam has done, western society would descend into never ending chaos.

Self-serving needs are not meant to be satisfied; they are meant to be put to death  – Ed Welch.

In an attempt to combat a world of self-serving courage, a growing number of Christians have stressed the need to return to the courage of Alfred Lord Tennyson’s poem. They teach kids that courage consists of shooting a thieving rabbit with a pellet rifle, scouting ahead for bears on the family hiking trip, or rubbing their hands in the  blood of their first kill. Such ideas of bravery often resonate with our minds. After all, I would have happily exchanged my school desk topped with a copy of the “Charge of the Light Brigade” for a charging stallion and a lance.

Although created with good intention, this definition also ultimately fails Christendom. Instead of encouraging a humble dependence on Christ, adrenaline junkie courage causes us to trust in our own ability to successfully master a dangerous task. I’m brave because I killed a turkey or because I went alligator hunting and returned with all ten fingers. What have you done recently? Admittedly shooting a buck or scoring a touchdown is not inherently evil. But they act of riding off into enemy cannot fire is not inherently biblical courage.

Biblical courage is about trusting Christ. According to Scripture, courage can be simply defined as: faithfully loving God and your neighbor regardless of the circumstances. This is what Jesus and the saints mentioned in the Bible did. Jesus healed on the Sabbath and spoke truth even when unpopular (John 9). He reached across racial lines to love his enemies by exposing their sexual sins in an attempt to give them living water (John 4:7-42). Instead of seeking their own self-interest, Peter and John healed the lame and spoke boldly for Christ; despite being physically threatened and eventually executed (Acts 4-5).  Biblical courage is lovingly speaking and living truth in a fallen world.

Although faithfully following God  means some of us will need to take a stand like David and physically opposing those who mock God, most of us will display courage in the mundane setting of every day life: around the water cooler, in the dugout, or at our school desk. True courage is a child choosing to praise the winning team instead of complaining about the ref’s last call. Courage is refusing to lie when your boss tells you to. Courage is confessing Christ before your classmates when your teacher says all religions are equally true. Courage is turning off the big game to make your worn out wife and mother of two dinner. Courage is confessing your sin to those whom you’ve hurt. Courage is actively decreasing so that God may increase.

Despite my childhood love of cavalry charges, I don’t anticipate dying in a mounted sword fight. Nor will I be encouraging my son to leave for school with a lance tied around his shoulder. We can employ biblical courage whether we pursue baseball, oil painting, rock music, classical poetry, or the theatre. The truly courageous person loves the Lord with all his heart, soul, and mind and his neighbor as himself in every situation (Luke 10:27).