What To Expect When No One’s Expecting 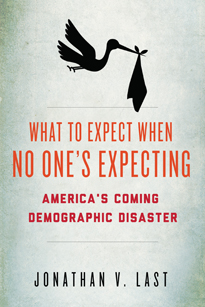 According to our God, both the little screaming child who just slapped its mother across the face and the infant peacefully cooing itself to sleep are blessings from above. But the divine perspective of Psalm 127 is quickly losing traction in the world as record number of couples doubt the wisdom of having a house full of children. Seeking to understand why, “only 3 percent of the world’s population lives in a country whose fertility rate is not declining,” what affects childless societies will have upon the world, and how to combat the effects of this childless trend, Jonathan V. Last published What to Expect When No One’s Expecting: America’s Coming Demographic Disaster.

Though not written from an openly evangelical perspective or from a desire to “convince you to have babies” the book’s statistical revelations affirm a gospel centered world view (p. 10). As the reporter turned author found, children are an empirical blessing. When populations begin buying more adult diapers than baby diapers, the world becomes increasingly unstable. In the German state of North Rhine-Westphalia, the government launched a program that converts prostitutes into elderly care nurses (p. 99). In Japan, a nation that is projected to have one baby for every citizen over the age of 100 in 2040, the minister of finance encouraged the elderly to simply, “hurry up and die”[i] to save the country from financial ruin (p. 142). And by 2040, the United States will face its own financial crisis as there will be only be two workers to care for each retired baby boomer, costing each worker $8,578.00 just in Medicare expenses (p. 109). Although Last is aware that a childless world is an unprecedented event, his extrapolation of current research darkens our expectations.

Thankfully, Last does not leave us excepting only gloom. He offers several helpful suggestions that could encourage couples to have babies. He also gives his readers some good news discussing France, Georgia, and societal groups that have seen their fertility rates stay consistent or even rise above the fertility replacement rate of 2.1 children.

Not surprisingly one of these groups with higher than average birth rates is the church. According to Last, 41% of Protestants who attend church at least once a week “say that three or more children is ideal” (p. 86). He goes on to write:

Religion helps marriage and marriage helps fertility – the end result being that religiosity winds up being an even better predictor of fertility than either education or income (p. 87).

In short, Christians who value the gospel are having more children.

The challenge for Christians going forward will be to maintain their fidelity to the gospel. The world has increasingly less tolerance for religious ideals.  As Last notes, one’s-self is now the highest priority. Instead of godliness, humanity wants happiness. “Best Life Now,” anyone? And as a result of the world’s narcissism, procreation has become, “an act of self-actualization” (p. 93).

Self-lovers consistently advocate for less and less children. In Japan, a nation formerly known for being pet-crazed, self-love has spawned a new social class, the “parasite single.” These working, college educated women have become Japan’s biggest consumer class by choosing to avoid marriage and to live with mom and dad well into their thirties (p. 145). These women devote almost of their incomes to the pursuit of pleasure. Consequently, Japan’s birth rate hovers around 1.4.

The United States is following suit. The love of self is driving Americans to view pets as “low-maintenance replacements for children.” As late as 1985, fewer than fifty percent of Americans had a pet. Today American pets, “outnumber children by more than four to one” (p. 2). And over the past 16 years, the pet business has grown from a $17 billion to a $43 billion industry. America’s birth rate now sits at 1.9.

So when we hear people wax kindly about how their dogs are their children or when we hear people encouraging a couple to delay having a child until they can get that car, house, raise, etc. we must remember the source.[ii] And then, we must remain faithful to scripture. We must affirm that children (not pets) are a blessing. We must remember that, “the worries of the world, and the deceitfulness of riches,” place our souls in eternal danger (Mark 4:1-13). We need to abandon troubling earthly treasures and embrace the blessing of God (Mark 9:36-37).

Do not be conformed to this world, but be transformed by the renewal of your mind, that by testing you may discern what is the will of God, what is good and acceptable and perfect (Rom. 12:2).

When people or our own hearts doubt the wisdom of God’s plan, we should direct them to scripture first and foremost. But if you are in need of real world evidence that children are a blessing or if you want to know the real world cost of abandoning this divine directive, I would encourage you read What to Expect When no One’s Expecting: America’s Coming Demographic Disaster.

[ii] One word of caution: Speak kindly with those who advocate the above positions. Speak truth in love (Eph. 4:15). It’s possible that the “money lover” truly wishes to spare others the suffering of poverty or that the “ridiculous pet owner” might be barren mother. We need to address the concerns of their hearts with scripture and encouragement.